On October 24, 2012 I was privileged enough to be able to sit down with Howard Atkins, who at the age of 13 in 1944 started working for a new company called Decoralac. His role with the company was to haul the furniture on the night shift when work was finished. His partner, William Traficante, took him in earlier that year and they ran a few trucks hauling for Sears and Roebuck at first and in 1944 started working with Decoralac. At that time the company was located on Steele Street in an old brick building set a little ways back. Howard recalled that the upstairs was used for applying the black lacquer and decorations and the downstairs was used to store the furniture. Decoralac had installed a chain pulley lift on the outside of the building to transport the furniture between floors and 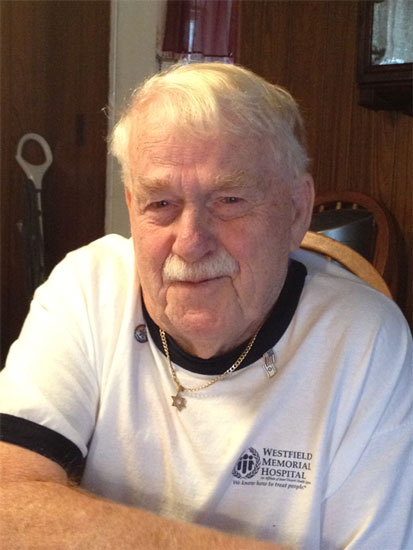 “I used to ride that pulley until I was told that I couldn’t because it was against the law.”

Howard continued to work with Decoralac when they moved from Steele Street around 1946 to the old Worsted Mills on 1st Street and then the Worsted Mills on Harrison Street in Jamestown NY between 1947 and 1948. His tenure with Decoralac ended in 1951 when he joined the service. While interviewing Howard he presented me with a picture taken at the Apple Inn in 1944. This picture showed the entire staff of Decoralac at the Christmas party they held. According to Howard this was a “treat” for him since he was only 14 years old and had never been treated to such a party. Howard recalled that it was the only Christmas party he remembered being held. When asked what he remembered most from his time with Decoralac he stated that,

“[Decoralac] was a Good place to be [with] good people to work with. The Coffin’s…you couldn’t beat them as far as taking you in. They were like family. I never had a cross word with them. I knew Pete quite well as far as work goes. They treated me like a kid.”

Of course at that time he was only 14 so Howard said that he was a kid and he felt like part of the family.

He remembered his time with Decoralac as one the he will cherish always and the people that he met stayed with him for 68 years. Struggling a little with his reduced vision, Howard, bent over the Christmas photo and remembered each of the people he worked with all of those years. As with family he would never forget them as long as he lived.