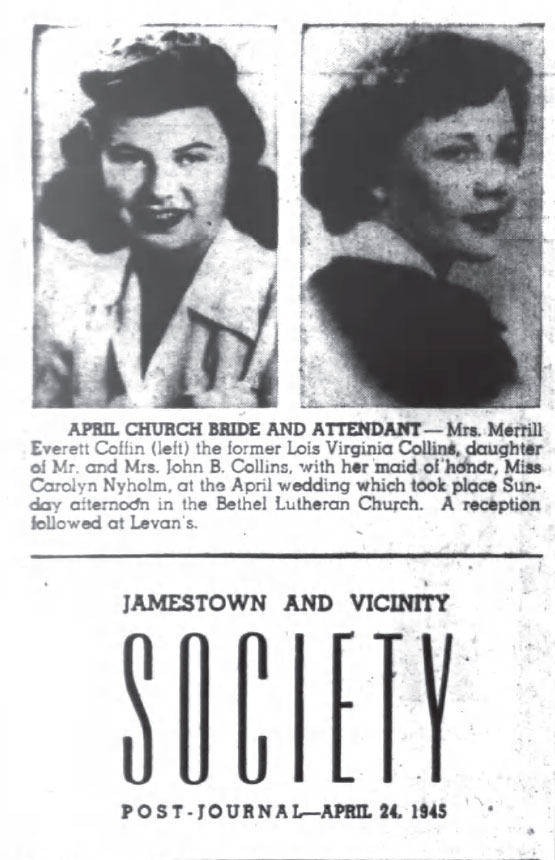 Mrs. Merrill Everett Coffin (left) the former Lois Virginia Collins, daughter of Mr. and Mrs. John B. Collins, with her maid of honor, Miss Carolyn Nyholm. at the April wedding which took place Sunday afternoon in the Bethel Lutheran Church. A reception followed at Levan’s.

Pink lilies and snapdragon with iris were arranged in floor baskets, against a background of palms, with two torchieres in which cathedral candles burned. Traditional wedding music was furnished by Miss Lillian Malmberg

The maid of honor was Miss Carolyn J. Nyholm, and the bridesmaids Mrs. Christ Dimas, Miss Frances Jennings of Chautauqua and Miss Barbara Coffin, sister of the groom, were all gowned alike, two in blue and two in pink. The dresses had identical net skirts and lace bodices, and they carried Colonial bouquets of pink rosebuds and sweet peas, with narcissi and blue bachelor buttons and Iris.

The bride was escorted and given in marriage by her father. Her wedding gown was of white faille, fashioned with a long train, fitted bodice buttoned In back to the waist, with a marquisette yoke accented by a leaf design, and long glove-like sleeves pointed over the hands. Her fingertip Bridal veil fell from a heart-shaped coronet of tiny seed pearls and she carried a Colonial bouquet of gardenias. White satin slippers, and a string of pearls, the groom’s wedding gift, completed the lovely costume.

The attendants were favored with gifts.

The bride’s mother wore a gray ensemble, with navy accessories, and a corsage of pink rosebuds and bachelor buttons, and the groom’s mother, a black and gold mandarin suit, with red rosebuds and white sweet peas. The maternal grandmothers, Mrs. Charles Johnson and Mrs. Alex Larson Both had corsage bouquets of purple iris and daisies.

A wedding reception and supper for 50 guests followed at Levan’s tearoom. Colonial bouquets and lighted candles centered the tables, with a three tiered wedding cake surmounted by a miniature bride and groom and lighted candles on the bride’s table. Favors were boxes of wedding cake tied in satin. Miss Anna A. Knowlton, at the piano, furnished music during the affair.

Mr. and Mrs. Coffin left for a short trip to Niagara Falls and Canada. For traveling, the bride chose a gold covert cloth suit with navy accessories, and a corsage of gardenias. They will be at home after May 1 at 333 Fairmount Avenue.

Both the bride and groom were graduated from J. H. S. in 1942. The bride is a member of the A. F. society, and is employed in the office of Dr. Richard N. Lindbeck. The groom is employed at the Union National Furniture company as a decorator.

~Courtesy of the Post Journal archives from Fulton History~