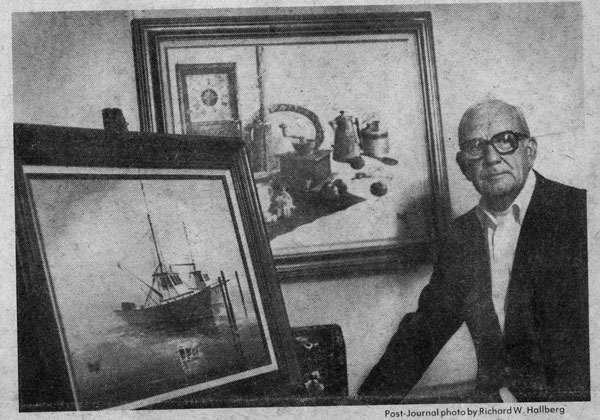 For that reason Coffin has devoted much of the last eight years of his life to painting scenes from America’s past and his paintings are so vivid with color and true to the last detail that it seems certain they will be preserved as reminders of America’s simpler days.

Coffin is a follower of the American school of realism and his most frequent subjects are old band, boats and  –  favorite theme – stage coaches.

He has made a picture of the stage modeled after a library photo of the Overland Stage but his rendition is of the coach after it ha been abandoned and left to deteriorate. The somber browns and the gray of the mysterious knot of driftwood in the foreground of the painting create a desolate mood. But the spray of colorful flowers near the stage, Coffin said represents hope – hope for the future, hope for our ability to hold on to the past.

When Coffin comes up with an idea fora  painting, he thoroughly researches it at the library. He wants to be sure that eery detail, down to the coils in a rope that are part of a boat scene, are authentic and historically realistic. For the stage coach painting, he said he visually studied a photograph and then “mentally tore it apart.”

“I strive for total detail,” he said. “I’m a stickler for realism”

Many of Coffin’s ideas have been generated during his travels, particularly to the New England area. He takes long his 35 mm camera and photographs scenes he things would look good on canvas. Later he studies his sides – the den where he paints continues about 20 boxes filled with them – and transfer what he has seen to canvas.

Recently, Coffin became interested in painting western scenes. He said artists Charles Russell and Federic Remington have, through their renditions of cowboys, Indians and cavalry confrontations, inspired a group of artists to follow through with that sort of theme. One spinoff of the interest in the American west, Coffin said, is the new cowboy craze which was dealt with in th movie “urban Cowboy,” and has led to the mechanical-bull riding fad that has swept the nation.

Coffin said hi peanuts western scenes strictly on commission. As for his other paintings, he researches every detail before his brush gets near the canvas. He studies everything form the topography of the area he will paint, to local Indian tribes and cavalry units that would have been present. He said people who purchase western paintings are very critical and look for every details and his only giving them what they deserve.

A patron who is not satisfied with the painting he ordered is not obligated to purchase it, Coffin says. His integrity as an artist won’t allow him to send a patron home if he isn’t really thrilled.

After selling a painting, Coffin said, he feels void in his life but he is happy for the person who has purchased it. He knows he put his best effort into producing the painting and would not sell it if he wasn’t completely satisfied. He said he tell patrons they can even return a painting they get it home and decide it isn’t really what they had in mind, but that hasn’t happened yet.

Coffin is basically a self-taught painter. His only formal training was  a correspondence course, the Famous Artist Course, that included 24 lessons to be completed in two years. He said the course was very demanding. “It was tough but I learned a great deal.”

Coffin’s Paintings Have Won Many Prizes

Coffin said his first insight into his artistic ability came to him when he was in the third grade. He painted a picture of Gen. George Washington crossing the Delaware River and gave it to the principal of Euclid Elementary School, where it hung until about 10 years ago when the office was remodeled.

Over the years he has worked as the head designer and decorator at Union National Furniture in Jamestown, president of Decorolac Furniture, art director at Arnot of Jamestown, a division of the Aetna Steel Co., as a political and sports cartoonist for The Post-Journal and is now the vice president in charge of sales an marketing for Adanlock, a furniture manufacturing company.

Coffin’s list of exhibits is as impressive as his work history. He recently completed a one-man show at the Arnot Art Museum in Elmira, which is an accredited art museum, and has had one-man shows at both Welch’s in Westfield and the Little Theatre in Jamestown. His work has been shown at displays at Gallery I in New Haven, Conn., Mystic Art Festival in Mystic, Conn, at the Elmira Arts Festival, Bemus Point and the Jamestown Downtown Arts Festival.

Coffin has won many first place and best of show awards and has had limited edition prints produced by the McCourt Label Co., of Bradford, PA for three successive years. Each print of a limited edition series is hand signed by the artist. The plates are destroyed after a fixed number roof prints  has been made and the value each print increases with time.

Locally his paintings are on display at the Ironstone Restaurant and the Marlin Rockwell Division of TRW.

Coffin is excited about June 14 opening of his gallery. He said he and his family t converted the barn where he used to keep horses to a gallery, decorated in a early American motif.

Coffin said his paintings are usually sold be between $400 and$700 and he never accepts advance payments for a commissioned painting.

He started painting in oil eight years ago but then discovered acrylic paint. The water-based paint, he said dries faster and gies him more tome to work. Because he works weekdays he devotes most of his free time nights and weekends to painting.

Natural light is the best to paint in, he said but when nature turns off her light, he switches on an incandescent light. He never uses fluorescent light because color looks different.

Coffin’s paintings are fond reminiscences of a time before crime, inflation and the price of gasoline dominated our thinking, of days that were enjoyed just because the sun was chignon and the chores were done. His one man who realizes that the only way to face future is with one eye on the past.