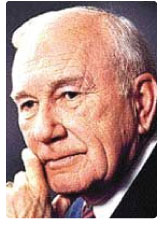 He was born November 4th, 1924 in the city of Jamestown, New York to George and Lillian Anderson Coffin. With no formal artistic education after high school, his talent came to him naturally.

In 3rd grade a pencil sketch of Washington crossing the Delaware was hung in the principal’s office for the full year. He began art courses in Jr High. During his high school years he helped on the Art Staff for the Annual. With his natural ability and what he learned in that 9th grade course he started that summer working at Aburg sign. After this experience he majored in art through high school and graduated with an art diploma in 1942 from Jamestown High School.

At the time there was a 7 hour comprehensive exam to graduate and he passed with an A. After high school he continued with his skills first with Carnahan Shears for two years as a window decorator and sign maker.

Merrill than became the head designer and artist at Union National Furniture Company from 1945 to 1948, only three years after graduating high school. Here he helped establish the chinoissiere form of furniture design for the company. Developing his skills and stepping out on his own he then decided to establish his own business with his brother and father. The business which was nationally known as Decorlac, flourished from the years 1948-1954. Decorlac specialized in the chinoissiere furniture that Merrill helped define at Union National. It was during this time in his life that he took the famous artist course in Westport Connecticut in 1950.

As the advertising manager and art director at Arnot Jamestown, division of Aetna Steel Corp, he designed all the state rooms in the Atomic powered cargo ship the USS Savannah the only one in existence at the time. Also Ford Motor Company seat covers were designed by Mr. Coffin in their Ranch Wagon of the 1950s.

After helping to establish Arnot, Merrill once again changed positions. He took over the position of Vice President of Sales and Marketing and was on the Board of Directors of Adonlack. After retirement he focused on his painting. First creating works in oil then adopting acrylic paint for their flexible use and quick drying. He was a strict realistic painter, with no patience for cubism, surrealism or modern art. He greatly respected the old masters and admired Norman Rockwell and Andrew Wyeth who were actively participating in the world of art during his time.

Mr. Coffin’s work can be seen throughout Chautauqua County in many forms. Throughout the early 1950s his work was featured in the local newspaper, the Post Journal, with political as well as a general cartoonist. For those who have traveled to Midway and have ridden the miniature train you may remember the animals and characters which he designed and painted. The local dairy farm on Martin Road, Nelson Dairy, used his logo on milk jars. His work was also used in Elcee collectibles.